Controversial Topics to Write About: Controversial topics are best for essays, debates, and speeches because they can stir up strong opinions on both sides.

When choosing the most controversial topics to discuss, it’s good to know and familiarize yourself with the arguments of the other side. By understating the controversial statements it helps you to develop critical thinking skills and better understand the topic and be in a better position to defend your argument.

When you are in a position to think critically and understand all points of the topic, you are in a better position to engage your audience. The skill can be applied to public policy forums, political discussions, school debates, etc.

Controversial Topics to Write About

1. Doctors should be allowed to prescribe medical marijuana to severely ill patients.

2. Agnosticism can be simply defined as skepticism regarding theology.

3. Governments ought to stop child labor.

4. Health insurance companies should be refused to use genetic information of clients.

6. Higher education should only be accessible to all good students.

7. HIV tests should be available in drug stores like pregnancy tests. 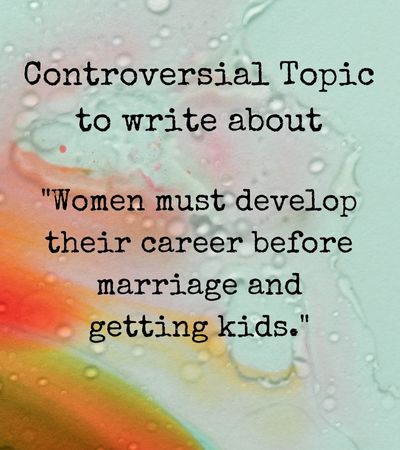 8. Homeschooling is an effective education program for rural areas and long distance regions.

9. Hummer buyers are sad people who over-compensate for things.

10. Hunting should be restricted to some environmental areas.

12. Women must develop their careers before marriage and getting kids.

13. Live with your lover before getting married.

14. Nuclear power is a viable energy source for the future.

15. Parents are to blame for unruly children in public restaurants and bars.

16. People who have committed serious crimes should not help make laws for others.

17. Pharmacists should be permitted to refuse to sell the morning-after pill to underage girls after wrong dating.

18. Religious fundamentalism is a growing threat to our society.

19. Sex offenders should be castrated.

22. Students should spend the whole day studying and not on outdoor team sports activities.

23. Students who download copyrighted music education should not be prosecuted.

25. Would you rather be a pirate or a ninja?

1. The minimum wage and its impact on employment

2. The overuse of mudslinging in political races

8. Using torture as an interrogation tactic

10. We should have gun control that outlaws firearms with high-capacity magazines.

11. Why women have less wealth and how to fix it

12. Will world peace ever be obtainable

14. Convicted felons should not be allowed to vote

15. Politicians should be banned from becoming lobbyists

16. Should Social Security be privatized?

17. Should the Electoral College be replaced by the popular vote?

18. Should the words “under God” be kept in the U.S. Pledge of Allegiance?

20. The government should put an end to income inequality

21. The Roe vs. Wade Supreme Court decision should be overturned

22. The U.S. should not continue its practice of drone strikes abroad

24. The importance of the school prayer at early childhood education institutions.

25. The minimum wage only should be at a level at which a person can survive.

27. Santa Claus should get a makeover

28. Would you rather be the hero or the sidekick?

29. Working on night-shifts costs you at least ten years of your life.

Good Controversial Topics to Write About

7 Racial Profiling: Is there a place for it?

9. Refusal to recite the Pledge of Allegiance in some American schools

10. Registering to be an organ donor

11. Removing children from abusive homes to be put in “the system”

13. Salaries of professional athletes vs. salaries of military men and women

17. Should capital punishment be outlawed?

18. Should the president govern the nation by a set code of ethics?

20. Stricter penalties for those found guilty of animal cruelty

23. The benefits of First Nations casinos

24. The impact of mandatory minimum penalties in federal sentencing

25. The music industry is mafia-like controlled and therefore the CD prices are high.

3. Mandatory spaying and neutering of pets

5. Santa Clause vs. the Easter bunny

6. Santa’s elves ought to be paid minimum wage

7. Should everyone on earth get 3 wishes at the same time?

8. Should humans eat to live or live to eat?

9. Should teachers too have a uniform in schools?

10. The benefits of texting while driving

12. Twilight vs. The Vampire Diaries

15. Which Football is real Football? The game they play all over the world or the game played in the USA & Canada?

16. Which is better: nightdreaming or daydreaming?

17. Who is likely to be more successful: introverts or extroverts?

18. Why Amazon must be stopped

19. Why cats are better companions than dogs

20. Why Coke is better than Pepsi

21. Why fish make the ultimate pets

22. Why Friends is better than How I Met Your Mother

23. Why homework should be abolished from the school system

24. Why nursery rhymes are quite twisted

25. Why smoking is good for you

1. Abandoning the requirement for a warrant for search ad seizures

3. Abolishment of the jury

5. Abusing the right to sue

6. Adoptive parents must legally allow biological parents to remain in contact with children

8. America should keep its nose out of other nation’s problems

13. Censorship: We have a right to know

14. College available to all

15. Common Core: Is it helping or hurting?

17. Corruption in the police force

19. Double standard between men and women in the working community

24. Financial protection for farmers against things like draught, and pests

1. 15 minutes of fame or staying behind the scenes?

3. Are cats better than a dog?

4. Are school uniforms even necessary?

7. Can you be best buds with your boss?

9. Cycling is better than skiing.

10. Does age matter in a relationship?

14. If Harry Potter magic was real, should it be legalized?

16. Is being politically correct the end of civilization as we know it?

17. Is everything fair in love and war?

19. Is social media just making it easier for people to stalk others?

20. Marvel is better than DC

24. Pizza in a square is better than pizza in a triangle

1. A woman’s place being in the home

3. Causes and effects of World War I

9. Midwifery is a lost art

10. The existence of ghosts

11. The legalization of marijuana

12. There is still a glass ceiling for women.

13. We need medical experiments on humans.

14. Wildlife safaris are orchestrated adventures for the happy rich.

17. Harsher punishment for those found guilty of sexual harassment

22. Immigration: Doing it the legal way is hard

23. Improve the standards in nursing homes

25. Is multiculturalism good for our society?

30. Reasons to give teenagers credit cards

31. The government should pay for all healthcare services.

32. Why stupid cat videos are ruining the internet

33. Why the Kardashians are more influential than the president

34. Why Walmart needs to implement a dress code