13 Colonies Map with Names: What were the original 13 colonies? Well, the Thirteen Colonies also referred to as the Thirteen British Colonies or United Colonies were located on the Atlantic coast of North America and were British colonies.

To have a real understanding of these colonies, below is a map of the 13 colonies.

This map can also be referred to as the original 13 colonies map. 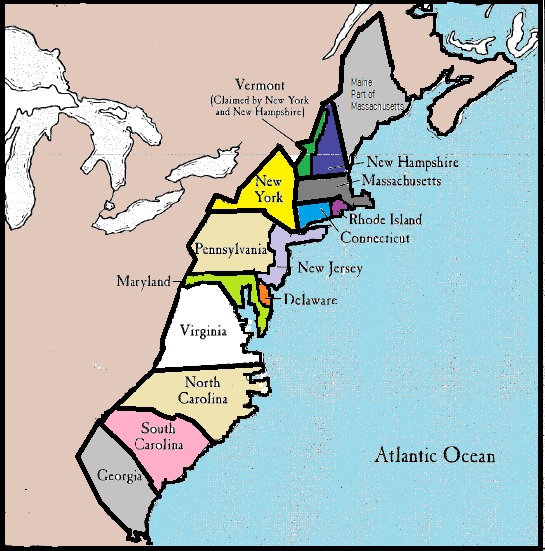 13 Colonies Map with Names: Are you interested in history and you want to know what were the original 13 colonies? Well, the Thirteen Colonies also referred to as Thirteen British Colonies or United Colonies were located on the Atlantic coast of North America and were British colonies.

Prior to the signing of the Declaration of Independence in 1776, these colonies began a revolution that saw the gaining of independence and the formation of the United State of America.

For better understanding, the original 13 colonies were separated into three geographic regions consisting of the New England colonies, the Middle colonies, and Southern colonies.

Who founded the 13 colonies and what was their timeline?

In the United States, the British’s first colonies to be settled were the Popham colony and Virginia Colony in 1607. However, in 1608 Popham colony was abandoned. The below-outlined order is based on the dates of establishment, not the dates they were chartered as colonies. Some Colonies like New Hampshire were established early but got the colony charter afterward.

What are the 13 colonies’ names in order?

READ:   How to Ask for A Letter of Recommendation from Employer

What are the 13 colonies in order map?

Which of the 13 colonies were first?

How many colonies merged to become part of Massachusetts Bay?

Who were the monarchs under which the 13 colonies fell?

Even though they were established at different timelines, The Thirteen Colonies eventually came to have a similar political, legal system, and constitution. In addition, they were controlled by Protestant English speakers. As outlined above the first colony was Virginia,  and the last was Georgia. Some like Popham were abandoned while others merged with the existing colonies. For instance, Plymouth and Maine colonies became part of Massachusetts.