Examples of Allusion in Literature: Allusions are often used when communicating in our day-to-day activities. Allusions are literary devices that improve our communication both written and oral. There are many allusions that one can use. The important thing when using allusions is to ensure that our listeners and readers are familiar with the kind of allusions we choose. If the allusion is uncommon with the other party, the whole meaning is lost.

What is an allusion

An allusion is a reference to something or someone commonly known from literature, religion, history, or culture, which the reader is also familiar with. For instance, in most religions, a snake is alluded to as Satan.

Examples of allusions in a sentence

Allusions help a reader comprehend and connect with a certain story, movie, poem, song, etc. When a well-known character or event is used information is passed on clearly.

What are Religious allusions?

They are allusions that make direct references to religious stories, characters, places, or events within a larger story/text.

What are Historical Allusions?

They are allusions derived from historical events, individuals, and circumstances. To allow the reader to comprehend this type of allusion, one must ensure his or her readers are aware of the allusion’s significance and place in history.

“Casanova” was a prominent Venetian explorer and writer who romanticized over 100 women during the early1700s. In short, referring to someone as a Casanova can indicate one who loves women.

What are Cultural Allusions?

These are allusions from one culture. The notable fact about cultural allusions is that they are limiting. What could be well known in ones’ culture could be new to someone outside that culture.

Richard Nixon was forced to step down by the threat of impeachment.

To become a courageous and true Moran, the Maasai culturally required a young man to kill a Lion with only a simple stick.

What are Literary Allusions?

They are disguised or indirect references to an individual, occurrence, a thing, or a part of a different text that is used by the writer to bring a better understanding to his or her work.

Single reference–: they are allusions given based on a single person or event. In these cases, the readers and the audiences should also deduce the same information.

READ:   How to Ask for A Letter of Recommendation from Employer

Causal allusion–when an allusion is made but it is not vital to the story and it is generally not part of the story. The author just mentions the allusion without any intention to link it to his work.

What are Mythological Allusions?

They are allusions based on a mythological figure, event, or story.

Venus (the goddess of beauty)

Hercules (referring to the strength of Hercules)

Examples of Allusion in literature

What are Allusions in literature

In literature, allusions are a familiar or common reference to something, someone, or an event from past literature, religion, history, or culture. Below are some examples of allusions in literature

“Cupid” was the Roman god of love, he was often seen with a bow and arrow used to hit the intended person.

He pours it out, Plutus, the god of gold,

Is but his steward: no meed but he repays

The allusion here is  “Plutus”, the god of gold in mythology.

“Atticus kept us in fits that evening, gravely reading columns of print about a man who sat on a flagpole for no discernible reason, which was reason enough for Jem to spend the following Saturday aloft in the treehouse.”

The allusion to “flagpole” sitting was a popular fad in the 1920s.

“But all so soon as the all-cheering sun

Should in the farthest east begin to draw

The shady curtains from Aurora’s bed,

Away from light steals home my heavy son”

In these specific lines, Lord Montague talks about “Aurora” – the Roman goddess of dawn. Lord Montague expresses his concern for his son Romeo, stating that he has frequently seen Romeo crying at dawn. Furthermore, Lord Montague expresses that Romeo lacked enough enthusiasm for life. A fact that something worried him and kept him awake most night. Therefore, he habitually slept at dawn – the time when the goddess Aurora awakes from her sleep and rises to the sky.

Example of Allusion in Poetry

black yet as Hagar’s daughter

tall as was Sheba’s daughter

threats of northern winds die on the desert’s face

In this poem, Angelou uses the reference “Hagar’s daughter” and “Sheba’s daughter”. Hagar is a Biblical figure, Sarah’s maidservant with whom Abraham had an illegitimate child, and whose line was cursed. Likewise, she feels that her line (black) is also cursed. 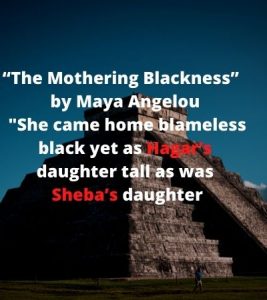 “Then leaf subsides to leaf.

So Eden sank to grief,

So dawn goes down today.

Nothing gold can stay.”

Robert Frost briefly mentions the Garden of Eden in the Bible to clearly illustrate his opinion that not even paradise exists forever.

“That civilisation may not sink,

Quiet the dog, tether the pony

Our master Caesar is in the tent

Where the maps are spread,

His eyes fixed upon nothing,

A hand under his head”

In the 1st stanza, Butler emphasizes on Julius Caesar, leader of the Roman Empire, as he strategies on his military plan. In the “Long-legged-fly” poem, Butler draws how Civilisation rests on Caesar winning the battle and hence keeping his empire. The dog is kept quiet and the pony tied far away, so as not to interrupt Caesar as he sits, deep in thought.

Conclusion: Examples of Allusion in literature

Allusions make literature work more interesting. That is why famous poets and writers like William Shakespeare, Charles Dickens, Jane Austen, Maya Angelo, William Butler Yeats, etc used allusions in their writing. Allusions should be easily identified and understood by readers to ensure the flow of a novel, poem or book is clear.