Transition Sentences for Essays: Are you in the process of writing your essay and do you want your work to have the right transition words to have a well-flowing and clear essay? Transition sentences contain transition words that help you to link one idea to another.

What are Transition Sentences for Essay?

These are a combination of words or phrases that enable you to express the relationship between two ideas. Without transition sentences, your essay would not fit together clearly.

An independent clause can be meaningful even without adding any word or phrase. Transitions words can be used to join two independent clauses by using a semicolon at the end of the first clause, followed by a transition word and then a comma.

READ:   Online Jobs in Kenya That Pay Through Mpesa

We can prevent road accidents by following all road signs: for example, not overtaking

Every time transition words are used at the beginning of a sentence they should be followed by a comma.

“United States of America’s economy was affected by Covid 19 lockdown. Likewise, other countries in the world were also affected.”

“Although, in the past personal branding wasn’t considered important when searching for employment current employers are looking for well-developed personal brands”

Transition words can be in the middle of a sentence to add a purpose to the sentence, depending on the setting. In this particular case, where transition words are used as an interrupter, the placing of words is flexible.

“The president’s directives were clear, for instance, no one should be authorized to sell prohibited goods.”

“Life in the city is expensive, but, there are better amenities.”

“Over the years, the discoveries of better modes of communication have created easier and faster methods of transmitting the information. Moreover, it has lowered the cost of communication to an affordable rate for most people.”

In the above case, the transition word used is “Moreover”.  This word falls under addition transition words. It helps the paragraph flow smoothly. Instead of having a long paragraph showing the importance of a better mode of communication, you can pause and still connect sentence one with the subsequent sentence.

Cause and Effect: Therefore, subsequently, consequently, hence, so, therefore, thus

Conclusion/Summary: Finally, in a word, eventually, lastly, briefly, to sum up, in conclusion, in the end, in the final analysis, on the whole, thus, to conclude, to summarize.

Contrast: notwithstanding, in contrast, on the contrary, but, however, in spite of, on the one hand, on the other hand, nevertheless, nonetheless

Emphasis: clearly, even, definitely, certainly, in fact, of course, truly, without question,

Example: for instance, for example, namely, specifically, to illustrate

Place/Position: beyond, above, adjacent, below, there, here, in front, in back, nearby

1. The research suggested that more extroverted managers can adversely influence investors’ opinions of their company and, consequently, its worth

2. He was disqualified and therefore could not compete to defend his title

3. During the last meeting the secretary read the chairman report and then the board report

4. One of the reason why girls may be considered generous is because they are gentle and they don’t get into fights often. In addition, girls have are more forgiving compared to boys

5. Although girls are considered more generous than boys that may not be necessarily true. There are several cases that have shown the cruelty in girls. First, we revisit a case where a 19 old girls .

Below we have looked at some of the types of transitions words commonly used in essays.

Cause and Effect transition words 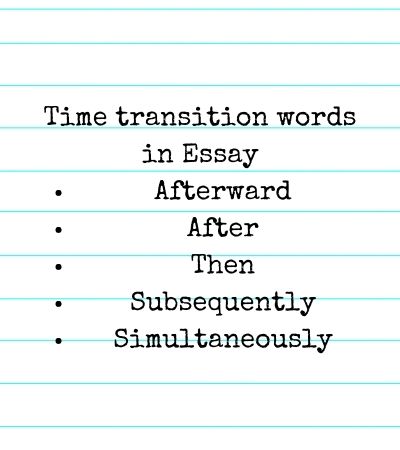 What are transition words?

A more complicated meaning of transition words is that they are a type of Conjunctive adverbs, they can be referred to as connective adverbs.

If we look at a simpler definition, the word transition means to move, change, connect, or the whole process of shifting from one idea to another. In this case, transition words are phrases or words used while connecting ideas or linking ideas that could be similar or different. They act like grammatical bridges.

What are the uses of transition words?

Transition words for essays will ensure that your argumentative or persuasive essay has a clear meaning and looks less wordy. Always use the Transition words depending on the type of information and idea you want to connect. You cannot use illustration transition words in place of comparison transition words. This would create a different meaning from what is intended. Identify the transition words to use at the beginning of your sentence, in between a clause, and even in summary sections. Once you do this, your essay will be well structured and better flowing.