Prepositions Definition: They are important words that are used before a noun, noun phrase, or pronoun to indicate a location, place, time, direction, or introduce an item. Without prepositions communication would be very difficult, that is why everyone needs to know how to use prepositions properly. For instance, it is grammatically correct to say “the cat is on the table” but a statement like “the cat is of the table” is grammatically wrong and someone may not comprehend the sentence. 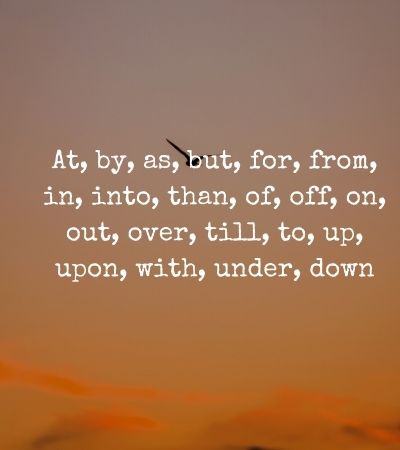 Simple prepositions are short and they are the commonest. They are used to define a relationship between nouns and pronouns or to join parts of a clause or sentence.

I am not going with you all.

The teacher is working in the staffroom.

He’ll be late for his flight.

She is playing on the sofa.

The acting of Debbie was so good.

It is a combination of two Simple Prepositions that connects the Noun or Pronoun to other words in a sentence.

He is out of his mind.

The ball is in between the two coaches.

Barred from the club meeting, he threw away the club documents.

I will go to the park provided it is safe.

I was pleased given the fact that I got a great response from my team members.

Assuming the possibility delayed flight, she made special arrangements for an airport transfer.

Compound preposition is formed through the conjunction of a non-prepositional word and a simple preposition.

Phrasal Prepositions are the type of prepositions that are formed by a combination of two or more words that act as a preposition. In other words, phrasal prepositions are made up of a simple preposition preceded by a word from any other different category, e.g. it could be an adverb, adjective, or conjunction.

The important note to always remember when it comes to Phrasal Prepositions is to have the right preposition combination. Often this is not an easy task, but the dictionary plays a vital role in confirming these prepositions.

Apart from      Apologize for  As for

Examples of Prepositional Phrases in a sentence

He constantly did everything according to the rules.

We have a lot of work ahead of us.

I didn’t like his business plan but I went along with it.

All the other rooms were empty apart from one in the corner.

There was a need to apologize for the mistake done.

I will take care of the baby, as for the dishes, you will look for someone else to clean them.

Read Also:  What Does cc Mean On Email

He was fine-looking, although I wouldn’t go so far as to call him attractive.

The company announced that we are not to make deals with anyone aside from our private investors.

The company went insolvent because of its poor management.

The race was tough enough for the runners contrary to previous experiences.

For the last 4 days, the patient hasn’t eaten a thing except for a few slices of bread.

I will visit my grandmother instead of watching the movie.

At the graduation ceremony, I sat next to my best friend.

He cannot meet you since he’s feeling out of spirits.

All Travelers must get a ticket prior to getting into the train.

Prepositional phrases are governed by more than one word. In other words, they can govern any words that adjust or describe the object of the preposition.