Causes of Fire in School: As we look at causes of fire in Kenya’s schools, it is good to understand that over the year’s Kenyan schools, especially secondary schools, have been facing numerous fires which have led to the loss of property worth millions.

Since the 1980s the rate at which school fires have been taking place has increased at greater rate. This is something that has caused great alarm to all the schools, government, parents and other stakeholders.

Read also: Activities to Build Self-Confidence in a Child

These fires majorly occur when the schools are approaching exams and the real questions include but are limited to What causes the fire in Kenyan schools? Who is to blame or to be accountable for these fires?

Causes of fire in Kenyan Schools

Some of the students who start these fires are under the influence of drugs. Students are often exposed to drugs such as bhang which influences their thinking ability and eventually they are unable to handle the pressure that comes with learning, school rule and exams and as a result, they opt for chaotic behaviours.

In most instances, the fires occur a few weeks before the exams, something that can be associated with poor exams preparation and exams phobia. Students have previously demonstrated against MOCK exams with an explanation that these exams are usually too difficult to handle. In order to avoid these exams, they opt to cause school unrest by causing fires.

Students have previously blamed the school management for failing to listen to their requests. In 2018 one boys’ school burned their school structure just because the administration denied them to watch the 2018 FIFA world cup match. Schools have been torched for simple reasons as food, school outings, school uniform etc.

In one instance in Nyeri High School, students locked four prefects in a dormitory and torched it. They accused them of harassment and unfair treatment. Four students lost their lives just because someone felt that a certain punishment given to them was not supposed to be issued. 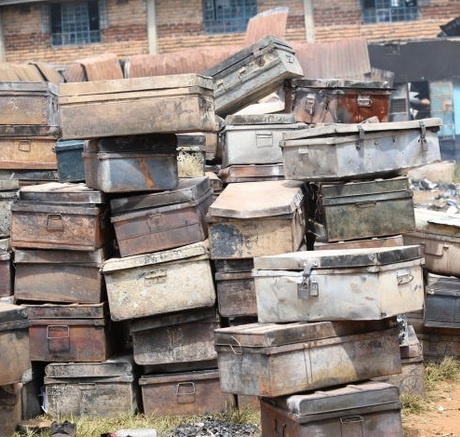 Bad company ruins good morals, during adolescence, many young people are easily influenced. Some will just do things to please others or to just get accepted. Negative peer influence has influenced students to the level where they burn their schools just to prove to a neighbouring school that they can also do it.

Another outstanding cause of fires in Kenyan schools is the fact that some parents do not take the initiative to guide their children. It’s common to find that some of the students who plan to burn their schools have actually been suspended in other schools due to indiscipline. It’s not clear why some students are more indisciplined than others. When a child lacks proper parental guidance then he/she will likely do what pleases them.

Unexpected transfer of teachers has also caused students to burn their schools. A good example is Ortum High School, which is located West Pokot County, where students burned the school just because the school headteacher was transferred unexpectedly.

Politicians interfere with the management of schools, especially in the instance where the government transfer teachers. To support or oppose the decision by the politicians’ students have touched their school just to prove a point.

The rate of social decadence in the country has increased and society has developed crooked attitudes where people do not care as long as the issues surrounding them are not affecting them directly. A good illustration is where students buy petrol from people around the school surrounding. No one questions or gets bothered by the idea that a student in a school uniform is purchasing petrol.

Poor management of schools leads to poor directive and accountability. When a school of over 500 students is left with only one teacher during the weekends it means students are at free will to do what they desire even without being discovered.

Corporal punishment ensured that students who had constant cases of indiscipline were dealt with and they actually felt the effect of their behaviour. Since this punishment was done away with many students have gone overboard and caused the deaths of so many students.

The education system in Kenya expects so much from a student. The pressures that come with too much expectations normally causes anxiety to the students and some are unable to deal with it. On the other hand, the teachers are normally overworked they are unable to have a close relationship with their students hence cannot tell when there is tension in the school.

The education stakeholders together with students have suggested several measures to reduce fire tragedies in Kenya’s secondary schools. Below we have looked at some of these measures.

All schools should have a counselling department that is always ready to offer necessary support to students. Teachers, parents and students should be able to come together and listen to students and have a dialogue on how to solve important matters affecting the school. Peer counselling is also important, to ensure that students can learn from people who are at their own level.

READ:   How to Apply For Birth Certificate Online In Kenya

Schools should not shun away from the issues of drug abuse. Students should at all costs be educated about the effects of drug abuse. In addition, the schools’ administrators should investigate the source of these drugs and where need be, involve the local police.

Although the Kenya education curriculum is wide with proper planning, teachers together with students can ensure timely completion of the syllabus. This will ensure adequate preparation time for exams.

Management styles vary and with continuous training of schools administrators, they will gain the right skills to manage their schools.

Devise ways in which students can be able to express themselves without intimidation. Ensure accountability to every person around the school. For instance, students can be given the mandate to vote for their leaders who will be able to pass their grievances to the school administration.

Parents should ensure that they play their role in good parenting. This can be done by engaging in the lives of their children.

Politicians should avoid politicizing school management issues to ensure that they do not raise students anxieties.

Since secondary school education in Kenya is subsidized by the government, there should be a timely transfer of these funds to ensure all the resources needed to run the school are available.