Words That Start with S to Describe Someone

Meaning: To be lively, bold, and full of spirit;

Meaning: Known to use irony in order to mock or express contempt.

“She is a calm lady although she is often sarcastic” 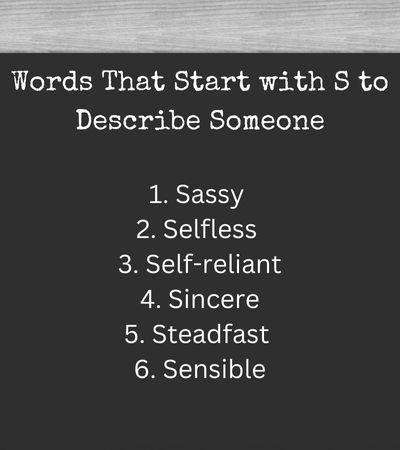 Meaning: Likely to hide feelings and intentions or not to reveal information.

“He was very secretive about his personal life”

Meaning: Preoccupied with one’s own emotional state, interests, or situation.

Meaning: gets pleasure from causing pain, sorrow, or humiliation on others.

“Dealing with a sadistic person can be emotionally draining”

Meaning: having sharp powers of judgment

“she was shrewd enough to read his emotions”

Meaning: a person with an extreme form of antisocial personality disorder.

“After therapy, his sociopathic tendencies disappeared”

“After her divorce, she became a scornful woman”

Positive Adjectives That Start with S

“Cancer patients are supportive of each other”

“The graduates were self-directed and self-motivated.”

“Ray is a self-disciplined young man who continues to inspire others.”

To be unselfish or concerned more with the needs of others than with one’s own.

“To continually serve other people one must be selfless”

dependent on one’s own abilities and resources rather than those of others.

Lack of pretense or deceit; proceeding from honest feelings.

“Sincere workers are often not easy to find”

decisively or dutifully stable and unwavering.

having or portraying a feeling of deep seriousness.

“The teacher looked at the students with a somber expression”

“The nurse who served me was softhearted”

done in accordance with understanding or wisdom; likely to be of value.

“He is a sensible customer”

Descriptive Words That Start with S

force of nature or of an animal that is ferocious, fierce, and uncontrolled.

“packs of savage wolves roamed in the streets”

spending a lot of time studying or reading.

“During the exams seasons, students are quiet and studious”

of or prompted by feelings of tenderness, sadness, or nostalgia.

“she felt a sentimental attachment to the place creep over her”

“she is detested by the snobby rich kids at college”

“Lack of enough sleep can leave you short-tempered”

affecting the senses rather than the intellect.

characterized by careful consideration or application.

“Starting a family should be considered a serious matter”

READ:   Jobs that will be in demand in the next 10 years

Showing a lack of good judgment or common sense; illogical and foolish.

“another of his silly jokes“

not easily persuaded; doubtful or reservations.

Ready to follow the authority or will of others; obedient or passive.

“Christianity requires a wife to be submissive to the husband”

S adjectives to describe a person

Conclusion: Words That Start with S to Describe Someone

There are many adjectives to describe a person, some are negative while others are positive. The above list of adjectives are some of the commonly used.