Use below map of Matumbo area to answer question 1-7 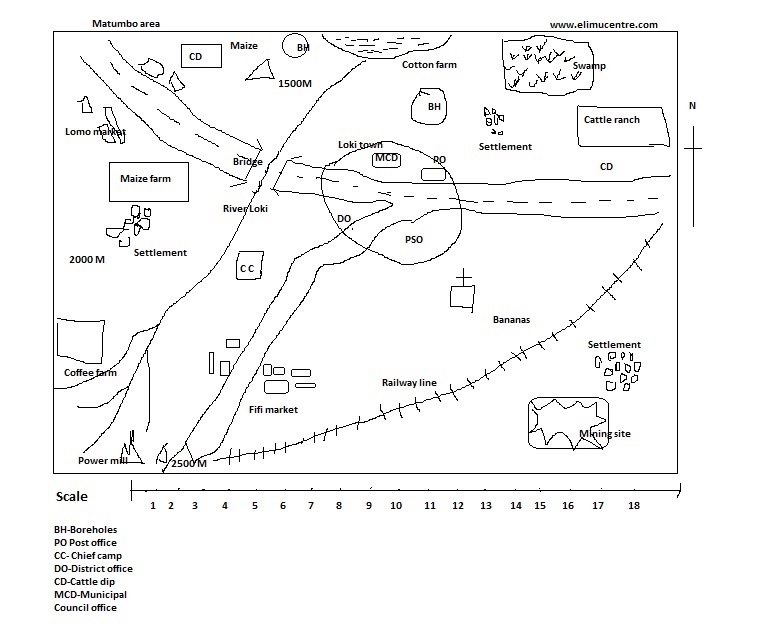 1. The land of matumbo area slopes towards

2. The local administrator of Matumbo area is mostly expected to be

3. The climate of northern part area is best described as

4. The highest place in Matumbo area is located at the

5. The main economic activity in Matumbo area is likely to be

6. The most widespread settlement pattern in Matumbo area is

7. Which is the main religion is Matumbo area

8. Three of the following feature are as a result of a process shown below. Which one is not?

9. The forces involved in production of the feature above are———————-forces

A) Up thrust B) Tensional C) Horizontal      D) Compressional

10. Which of the following communities is not found in the Northern Africa?

11. Below are facts about are relief region in Africa

i. It covers large parts of Eastern and Southern Africa

iii. Residual mountains are found in some areas

The region described above is

12. The following occurrence are as a result of a rotation of the earth except

A) Day and night B) Apparent rising and setting of sun

13. Which of the following countries located in Africa is not landlocked

14. Three of the following communities migrated and settled around Rift valley. Which did not?

15.Which of the following traditional leaders in Africa is correctly matched with the community he led ?

16. Which of the following political parties led Tanganyika to independence in 1961?

17. The diagram above represents the formation of

18. Thika town in Kenya has grown to be an important town mainly because

A) It attracts tourists B) It has high population

C) It has a railway line D) It has many industries

19. The Nile valley of Sudan is densely populated mainly because

A) It receives convectional rainfall B)Soil are very fertile

A Kenya became a republic         B) Kenya attained internal self-government

21. The immediate action to take when you find a thief breaking into a house is to

A) Report the matter to the police B) Shout for help

22. Which of the following courts deal with matters involving civil cases on Muslim?

23. Which of the following is manufacturing Industry?

Use the map below to answer questions 24-27 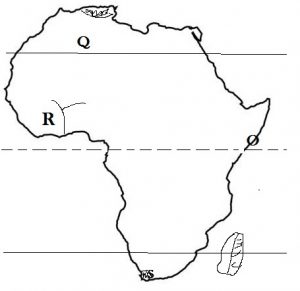 24. The river marked R has its source at

26. On which month of the year is the sun overhead on the latitude marked Q

27. The climatic region marked S receives most of rainfall during

28. Which group of crops stated below were introduced by white settlers?

29. Which of the following statement about Australopithecus is correct? He

A) Used fired to roast meat B) Made Iron tools

30. Below are facts about a vegetation zone

Grass is tall and dries during dry season

Trees are spaced and are medium height

The vegetation zone described above is

31. The type of rainfall shown below is likely to be experienced in three of the following except 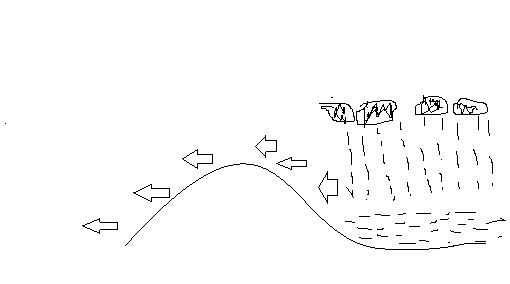 32. The main beef cattle ranches in Kenya are found in

33. Which of the following Agricultural practice is likely to cause soil erosion?

34. Three of the following are River lake Nilotes found in Sudan. Which one is not

It is used to make cement

It is mined on the floor of a valley

The mineral described above is likely to be

36. Which of the following industries is classified as a service industry?

A) Shoe making B) Juakali industry

37. The least used means of trancport in Africa is

38. Who among these early explorers linked explorations with colonization in East African?

39. The main reason why the Hehe community resisted European invasion in Tanganyika in 1891-1898 was

A) They wanted to continue trading with Arabs

B) They were against the harsh German rule

C) They wanted to protect their culture

D) They were unfriendly to foreigners

It has refinery for crude oil

It is main commercial town in its country

The town described above is

41. Three of the following counties used peaceful means in their struggle for independence

42. The following statements are true about Julius Nyerere of Tanzania and Haile Selassie of Ethiopia. Which one was not

A) Both supported liberation movement in Africa

B) Both led their countries to independence

D) Both supported education development in their country

43. Which one of the following was not an objective I.G.A.D

A) Promotion of economic cooperation

B) Promotion of peace initiatives in the region

D) Liberation of countries under colonization

44. The main benefit enjoyed by people from internal trade is

C) People enjoy what they do not produce

45. Which combination of river drains their water in the India Ocean?

46. Tarangire Ruaha and Selous are game parks found in one of these countries

47. The Swaziland Kingdom was founded by

48. Slow population growth rate is likely to be influenced by

49. Which of the following was not a function of clan among the Ameru Community?

50. Which one of the following game parks is correctly matched with the country it is found?

51. Which one of the following is an economic right of a Kenya Citizen?

52. The Shona people are mainly found in

53. Which of the following is an example of Fold Mountain?

54. The African Union (AU) has its head office in

55. Assimilated Africans during colonial period in Senegal were able to

A) Become France citizens B) Govern some parts of Senegal

C) Be exempted from all taxes D) Become governors of colonies

56.Traditional rulers in the Norther Nigeria during colonial period were known as

57. Nelson Mandela was released from jail in 1990 because

58. The method used to extract petroleum from the ground is

59. In Kenya, county wards are represented by

A) Ward representative B) Member of parliament

60. Which of the following sets of towns are oldest in Kenya?

61. Three of the following are reasons why God created the first human beings. Which one is not

A) God wanted to resemble them

B) God wanted to take care of His creation

C) God wanted them to eat all the animals He created

D) God wanted them to marry and have children

62. Abraham became a friend of God mainly because

63. Which commandment tells us to respect other people’s property?

A) Do not commit murder

B) He defeated his enemies

C) Do not steal

D) Do not covet

64. Solomon was a famous King in Israel beause of one of the following reasons

A) He was married to many foreign women

B) He defeated his enemies

C) He built a temple of God

65. The prophet of Israel proclaimed God’s message because

A) They were sent by God B) They hated the rulers

66. Prophet Jeremiah was not ready to accept to be a prophet because

A) He was too old B) He was not educated

67. Moses ran away to Midianite because

68. God gave the Ten Commandments to the Israelites in order to

A) Guide them in their relationship with God and one another

B) Help them kill their enemies

C) Take others to court when they commit offences

D) Increase unfaithfulness among the people

69. The annunciation of Jesus’ birth is found in?

70. Who told Mary mother of Jesus that Elizabeth was expectant

71. In which town was Jesus born

72. What did John the Baptist warn the Romans soldiers not to do?

73. What lesson do Christians learn from the parable of the taxes?

A) Bury their money in the ground

B) Use their money for charity

C) Make use of the abilities God has given them

D) Take to court those who refuse to pay their debt

74. When Jesus appeared to his disciples seated in the house during resurrection they recognised him when He

A) Told them to cast nets into deep waters

B) Told them to preach the Gopel

D) Showed them his wounds

75. Which miracle did Jesus perform in Nain?

B) Turning water into wine

76. ‘Do not collect more than is legal’, Luke 3:13.These words were said by John Baptist to whom?

77. Which of the following was not an African way of showing generosity to the hungry people?

A) Giving food to hungry people

B) Helping the widows

78. Which of the following mountains did Jesus go to pay during the tome of suffering?

A) Believers of God B) Creation of God

80. Which one name is given to the following books of the Bible: 1st Corinthians, 1st, 2nd 3rd John, James, Philemon

81. The main reason why Joseph and Mary went to Bethlehem the night Jesus was born is because they wanted to

A) Look for a place to deliver the baby

C) Register in their hometown

82. In some traditional African communities people worshipped in a cave because

C) It is a God dwelling place D) Protects from danger

83. The virtue of self-control is BEST shown by Christians when they

A) Honour those in authority B) Tolerate those who mistreat them

C) Obey rules of the society D) Care for the sick

84. Which of the following prophets prophesied drought on the whole world?

85. The parable of the ‘Mustard seed’ teaches Christians

A) Faithfulness to His promise B) Growth to the kingdom

C) Praying without giving up D) Use of natural gifts

87. Dennis a standard eight boy does not want to clean the school compound because he has been circumcised. The best advice to give him is

A) Pupils should be circumcised after standard eight

B) He should get uncircumcised boys to clean the compound

C) Duties in the school are examples of service to God

D) He should behave differently since circumcision is a provision

88. In which one of the following towns did Peter learn througha vision that all people are equal before God?

89. Who among the following missionary groups sent Dr. Johann Ludwig Krapf to Kenya in 1844?

A) Church missionary B) Church of Scotland

90. Which one of the following religion is correctly matched with its place of worship?